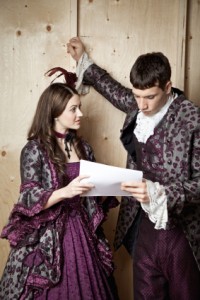 When the actor is to wear a costume for his role. It is most definitely different from his ordinary dailly dress. He will find it exceedingly helpful to rehearse in costume early on and as often as possible. If the actual costume is not available, a substitue of similar style and feeling may be used.

An experienced actor obviously does not need help in order to imagine their character by living in their costume. If the role is that of a young actor, who is about to play his first part, it may be very helpful.

A good example to understand how valuable wearing a costume may be is when an actor stands up. He will probably put his hands in his pockets.

He may have several objects in the pockets such as: handkerchiefs, a pen, wallet, book and maybe a dozen other objects which he will unconsciously need to use or make use of during his role When he finally puts on the costume, he will be disconcerted to find that he cannot hitch up his trousers, that he has fewer pockets, and in the wrong places, and that his collar make it hard for him to turn his head freely. If he does not become flustered and lose his lines altogheter, he will at least be awkward and self-consious, and his acting will suffer for it.

It is also true that rehearsing in costume is good for the teamwork. To find the actor to whom you have been practicing lines with for several weeks, suddenly changed in appearance is disconcerting to say the least, and destructive to performance coordination.